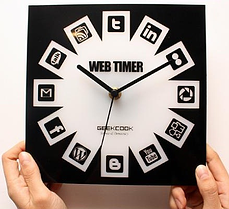 Get the most out of your Social Media Marketing efforts by knowing which days of the week your customers are active on social networks. Keep tabs on your followers to see when they are most likely to read, respond and share your posts with their networks. Making your updates during these times will help optimize your visibility to your target market and other potential customers.

A recent study from the Bitly Blog on when to and not to post on social networks:

For Twitter, posting in the afternoon earlier in the week is your best chance at achieving a high click count (1-3pm EST Monday through Thursday). Posting after 8pm should be avoided.

The peak traffic times for Twitter are 9am through 3pm, Monday through Thursday. Posting on Twitter when there are many people clicking does help raise the average number of clicks, but it in no way guarantees an optimal amount of attention, since there is more competition for any individual’s attention.

For Facebook, links posted from 1pm to 4pm result in the highest average click throughs. The peak time of the week was on Wednesday at 3pm. Links posted after 8pm and before 8am will have more difficulty achieving high amounts of attention. As with Twitter, avoid posting on the weekends.

Facebook traffic peeks mid-week, 1 to 3pm. While traffic starts to increase around 9am, one would be wise to wait to post until 11am. Traffic from Facebook fades after 4pm. Despite similar traffic counts at 8pm and 7pm, posting at 7pm will result in more clicks on average than posting at 8pm.