42 Expert Tips and Tricks to Help You Survive INBOUND

My first time in Boston with HubSpot was actually in 2011, the year before INBOUND kicked off. It was the Inbound Marketing Summit and HubSpot User Group Summit. Instead of 30,000 people at the BCEC, it was around 3,000 people (maybe!) at the Boston Sheraton. Seriously. 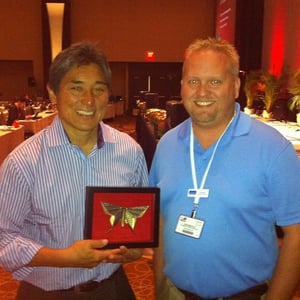 It was such an intimate event, I got to meet Guy Kawasaki right after his presentation for a photo, run into Chris Brogan, and cross paths with Brian Halligan, Dharmesh Shah, David Meerman Scott and others regularly.

Since then, I've only missed one INBOUND (2018). I've been on a boat in the harbor with Kevin Barber, I've had a midnight meal in Chinatown with Dan Zarella and Hansen Hunt (fresh eel!), coffee with Al Getler, had dinner with HubSpot executives, was in the press room pre-IPO with international reporters, was interviewed by David Meerman Scott in front of 20,000 attendees... I've had a hell of a great time at INBOUND.

I've also been exhausted, been hungry, missed sessions, and had a dead phone.

So now I'm sharing my experience and advice, along with a few other Impulse Creative conference veterans to help you have an amazing INBOUND experience.

Wear comfortable shoes and layers. You may be walking in the early morning and late evening, and the climate inside the venue can be unpredictable.

Bring portable chargers so you're not held hostage by an outlet in the hallway while that person you've been wanting to meet all week walks by...

Stop long enough to have fun. Go see the house of Paul Revere and make sure you visit Yankee Lobster Company.

Make the trip to Chinatown for dumplings!

Try to take in a Red Sox game while you're in town - Fenway Park is epic.

Bring cash, bartenders (at happy hour and open bar events) serve you quicker with Andrew Jackson in your hands.

Go to the happy hours Russell mentions above (and the parties) - networking is half the point!

If you couldn’t get into a session, check the day of for new openings. That’s how I got my butt in Rand Fishkin’s session even though it immediately booked out when people chose the sessions.

Pack snacks. Sometimes your session is far from the food court, and just like racing for a connecting flight, you might miss your next session if you stop for a bite.

Bringing a refillable bottle to get cold water at foundations and stay hydrated. If you're flying, make sure it's empty before you go through TSA!

Bring a physical notebook and pen. It won’t die on you if you can’t find a charger.

(Plus, research shows that writing notes is better for your brain than typing!)

Talk to strangers!! It can be easy to rush from session to session without interacting with others in the sea, but making small talk is the best way to network.

Leave blocks of time in your calendar for some networking. This lets you either have some time to breathe or be able to go deep into conversation (and even beer/wine) with someone to gain knowledge and increase your network. Bonus: Set up a calendar link specifically for INBOUND you can share with people! 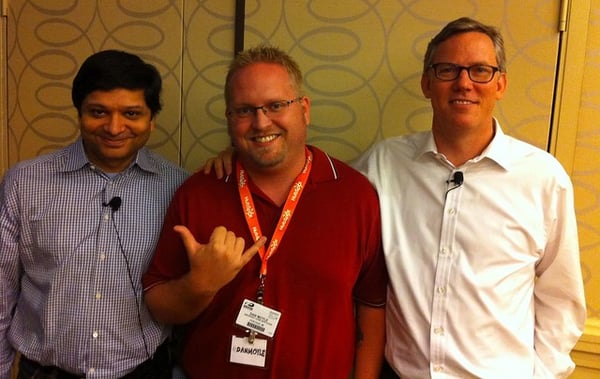 Dan Moyle with Dharmesh Shah and Brian Halligan in 2011

I've been to Boston a few times. Since the Inbound Marketing Summit and HubSpot User Group Summit in 2011, I've been every year except one. I've learned a few things over the years. Here's my list if tips to survive any INBOUND.