No one should speak teenager; 6 things that should NEVER be said outside of an instant message 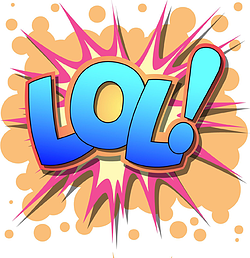 Hello, I’m Rachel and I am a recovering instant messenger. I used to speak internet shorthand during face-to-face communication (not all of them, so give me a break), until I realized that I am an adult and should probably learn how to speak in a real conversation. Here are a few acronyms that I used to say, but have also heard while eavesdropping on random people’s conversations. Trust me, listening to people is just as fun as “people watching”. The moral of this story is that you are an professional, not a teenager typing shorthand into a computer - so grow up and talk like an adult.

I hear LOL or Laugh out Loud said way more in daily life than it should be. I mean, come on, who really says “LOL” instead of actually laughing when something is funny.

Laughing my a$$ off just sounds like a serious medical condition. So do me a favor and go get that checked out. Also, keep it classy and don't go around town saying it to people because they might just ask you if it is contagious.

This one is just ridiculous. Even when saying this in an instant message, obviously you are not Rolling On Floor Laughing because you wouldn’t be able to type. If you say this acronym out loud to people, then we can no longer be affiliated.

Hashtagging is becoming a new trend started by Twitter and has since migrated to Facebook, Instagram and is now even searchable through Google Search. When used, they should stay on social media and only be used when relevant. I admit, when I first started using hashtags I was saying them out loud. I finally realized that people were looking at me funny, and thinking that I was a total nerd (ps-love the nerds). Jimmy Fallon & Justin Timberlake show you what a Twitter conversation sounds like in real life. This video is hysterical and makes a great point while poking fun at die hard hashtagers; they even have a gang sign. #LOLOLOLOLOLOLOLLOLOLOLOLOLOL

OMG, Becky look at her butt (sorry I had to). This is one of those acronyms that has been alive the longest, standing in for Oh My God. I am also guilty of using this one, but now that I think about it... it really doesn't make sense. Nor does oh my goodness, or oh my word... huh? I guess I just had an epiphany. Oh dear.

I think we all know that Facebook is to blame for this one. Here is a scenario: You and your BFF (see what I did there) are shopping at the mall and he/she tries on a shirt that you think looks awesome. Instead of saying that they look fantastic - you do the thumbs up and say "LIKE". My response would be, seriously, you only like it?

Bottom line: you should always speak like an educated adult and never like an instant messaging teenager. As a marketer and as a person you always want to convey a consistent and professional message. We need to always be mindful of the words that come out of our mouth, because we want every word to instill confidence. So the next time that you are having a face-to-face conversation, try to refrain from using this internet lingo. Even when you are interacting on social media you should try and show that you are a confident leader in your industry... not an LOLer. Let's face it, people have judged for less. If you have fallen off the bandwagon, and this sounds like you... it's OK and it can only get better from here. Check out this free eBook on how to master Social Media for Business.