Impulse Creative was invited to HubSpot's very first annual Partner Day exclusive to only Gold, and Platinum Partner Agencies. It was held at HubSpot Headquarters in Boston, Ma in the beginning of April 2014. Remington and I were able to attend while the rest of the team held down the "Fort" (Fort Myers that is!). We had the opportunity to tour HubSpot and connect with other top agency partners. From our experience at Inbound2013 we were shuffling from seminar to seminar and were introduced to most of the other HubSpot team and other agencies, but we felt that Partner Day let us actually get to know everyone on a personal level and it was awesome!

When we first heard that we were invited to go we were so freakin' excited and started planning immediately. We were a little worried that we would freeze out tails off since we live in the sunshine state and have been seeing the constant blizzards in the New England states. When we got there I realized that I had completely over packed and it was the equivalent of a Florida Winter. But once we got there we jumped in with both feet and immersed ourselves into the HubSpot culture and allowed the creative juices to start flowing.

Two weeks from the event Remington was asked to speak on a panel about.. well anything. The session was called "Ask Me Anything" and of course he killed it! That is just one step closer for him to speak at Inbound2014 (hint, hint). Personally, I loved Dan Tyre's session 'Grow Your People, Grow Your Agency.' Dan is so personable (*fist bump*) and is a fantastic speaker. Every speaker was brilliant and I wish we could've seen them all but you had to choose which sessions you wanted to see. It was basically two days of awesome! My head is still spinning from the shear brilliance and awesome culture that HubSpot has to offer. It is exhilarating to have been able to listen to such influential people and how genuine my role models are.

It never ceases to amaze me how transparent HubSpot is, they tell you like it is and don't hide anything from you or their employees. They treated all of the Partner Agencies to Legal Harborside where they had open bar (hell yeah) where I may or may not have asked Brian Halligan to come over to my group because someone bet me that I wouldn't (*Cough* Dan MacAdam). We all had a great time drinking and eating the delicious food, but more importantly we were able to connect with each other as equals. It wasn't a competition about who's agency is better, it's all about how you can genuinely help each other become more successful. Hey we're all human right? I feel privileged to be a partner and honored to have been able to visit and meet like-minded individuals and we have HubSpot to thank for that. 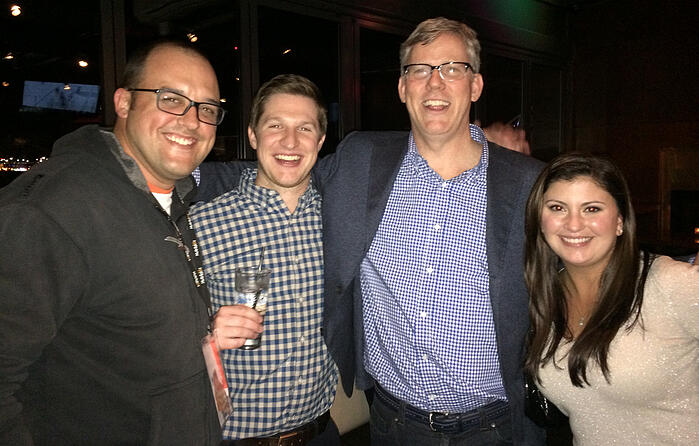 I learned a ton and had a great time playing with other 'big dogs' in the industry and I am looking forward to next year! I am so excited for the new product releases that were briefed (sworn to secrecy) and seeing everyone again in September. I have to say a big thank you to HubSpot for allowing us into your stomping grounds and supporting us not only as an agency but as people.